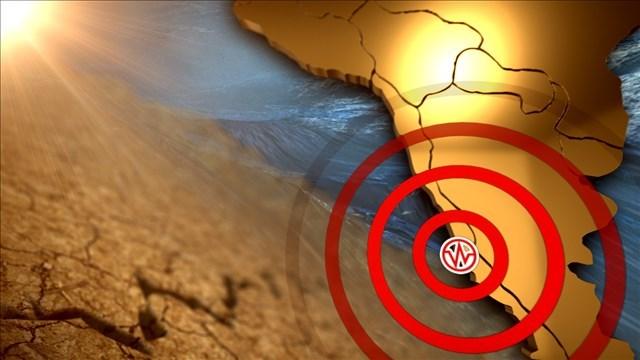 (CNN) -- A magnitude 7.7 earthquake occurred off the coast of southern Chile Sunday, 40 km (about 25 miles) southwest of Puerto Quellon, according to the U.S. Geological Survey.

The Pacific Tsunami Warning Center had issued a tsunami threat message for parts of the Pacific Ocean close to the earthquake; by 10:30 a.m. ET the center said the threat had passed.

A "state of precaution" that had been issued for the region of Los Lagos has been lifted, according to the Chilean Navy Hydrographic and Oceanographic Service.

And Chile's Ministry of the Interior and Public Security canceled the tsunami evacuation for the beach areas near the quake zone.

Shortly after the quake hit, Chilean President Michelle Bachelet posted a tweet expressing support to the people of her country.

"Much strength and mood to the compatriots affected by the earthquake in Chile and other areas of the south! Emergency protocols are already operating," Bachelet tweeted.

Chile sits on an arc of volcanoes and fault lines circling the Pacific Ocean known as the "Ring of Fire."

Since 1973, Chile has had more than a dozen quakes of magnitude 7.0 and above.

In February 2010, an 8.8 magnitude earthquake killed more than 700 people and affected more than 2 million others, according to Chilean officials.

That quake struck off the Pacific coast about 60 miles northwest of Chillan, Chile, at a depth of nearly 22 miles, the USGS said.

The city of Concepcion, Chile, and the Maule and Bio Bio regions were devastated, with buildings in ruins and roads left unpassable.

In the quake's immediate aftermath, more than 1.5 million people were without power in and around Santiago.