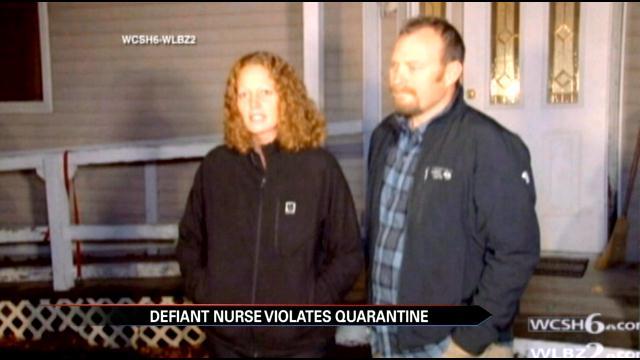 Maine Governor Paul LePage has vowed to “exercise the full extent of his authority” to force nurse Kaci Hickox to stay quarantined inside her home for two more weeks after returning from Africa where she treated ebola patients.

She defied the state's request by taking a bike ride with her boyfriend.

She returned from treating Ebola patients in West Africa last week and has yet to show symptoms, testing negative for the virus twice.

On a local television station, Hickox says she is taking a stand for herself and other health care workers who will soon be coming home from the front lines of the outbreak.

“I'm not willing to let civil rights be violated when it's not science-based.”

In a statement to ABC News, Governor LePage says the only way this issue will be solved is for Hickox to be tested for Ebola a third time.

“I'm not sure how this resolves anything. The blood test is only positive if you have symptoms of Ebola,” says  ABC News Chief Health and Medical editor Dr. Richard Besser.

Despite experts insisting Hickox poses no threat to the community, the governor told the public on WGAN Radio that people in Hickox's town are afraid and angered.

“We've put a state police on her just to try to protect her. The tempers are starting to rise up there, and I don't want her to get hurt either,” says LePage.