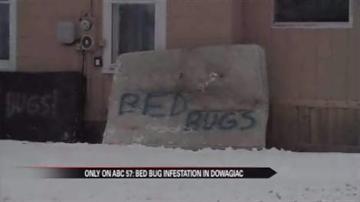 DOWAGIAC, Mich. --  One family in Dowagiac is ticked off, but it is a different kind of bug that is sucking their blood and money.

A family moved into a new home and moved out two weeks later because of a massive bed bug infestation.

"We wanted more room for our children so my husband talked to his ex-boss and he said you can move right in,” said Robyn Skorupa.

So Skorupa, her husband and two children moved in and rented the home on Keene Avenue,
but when they went to sleep in their new dream home, what they woke up to was a nightmare.

"My daughter had bites literally all over her body,” said Skorupa.

Skorupa says she and her family were bitten hundreds of times, so she called her landlord Svend Jorgensen to take care of the blood suckers.

"One of his workers came in with stuff you would get from your local hardware store and bombed,” said Skorupa.

The landlord had the home professionally fumigated twice, but the infestation was so bad the bugs kept biting.

But instead of paying for more treatments to get rid of the bugs, Skorupa says the landlord evicted her family after only living in the home for two weeks and never gave them their deposit back.

"While we were cleaning out our stuff, he brought two other people in to look at the house knowing full well that there are bed bugs in there,” said Skorupa.

Now Skorupa says she is out thousands of dollars.

"We lost all our beds, our couches, our chairs, and our tables,” said Skorupa.

So now she wants to get the word out to the community so another family isn't bitten up by the bed bugs.

Skorupa called the city about the home.  She was hoping they would condemn it.  She says they told her all they can do is write a letter to the landlord to take care of the problem.