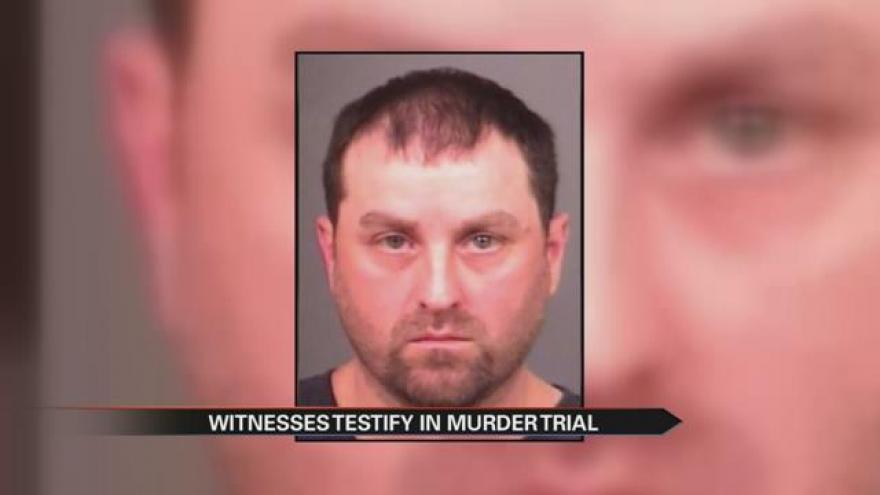 The man who allegedly beat his neighbor to death last summer, after she asked him to turn down his music, was in court today.

Donald Wilson is being charged with the murder of 67--year-old Joann Newgent.

The main piece of evidence is a table they found in pieces in and near a dumpster on the side of the apartment complex.

Inside Newgent's apartment, Corporal Slater said there was blood all over Newgent's living room, broken and bloody pieces of a table, and a small blood stain on the outside of the victim's door.

In the defendant’s apartment, Corporal Slater said he found a few things noteworthy.

He pointed out that Wilson had two very organized hampers, one with underwear, socks, and washcloths, and the other with t-shirts and jeans.

He had one pair of jeans sitting on top of a hamper.

Police found Wilson in his underwear.

On the other, was a blood-stained towel.

They sent both to the lab for testing.

The other piece of evidence he says he found strange was a wad of thousands of dollars wrapped in rubber bands in his wallet.

Corporal Slater says he saw no evidence of drug use in Wilson's apartment.

Joann Newgent's neighbor and close friend, Clark Curtis, broke down crying as soon as the prosecutor asked him to relive his friend’s last moments alive.

He was actually the last person to speak with Joann.

He says she called him, and the last thing he heard is "oh my god" before the phone went dead.

Clark Curtis tried to call her back three more times with no answer until he called 911.

He said about 10 minutes later, she called him to tell him that she had just asked their neighbor, Donald Wilson, to turn down his music, and he slammed the door in her face.

Clark said he did have a few glasses of vodka earlier in the day, but he's confident in his timeline of events.

The state also called Jeremy Spencer, who claims he saw Wilson after the incident from the next door parking lot of a laundromat.

He says he was walking from Newgent's apartment carrying a tabletop and three legs to the dumpster, which investigators later found there.

He says the manner of death was homicide.

Witness Jeremy Spencer also says he saw a rebel flag tattoo on Wilson's left side. He thought he noticed it on his calf.

The judge had Wilson get up, unbutton his left sleeve, and show the jury the tattoo on his left forearm.

It was, in fact, similar to Spencer's description.