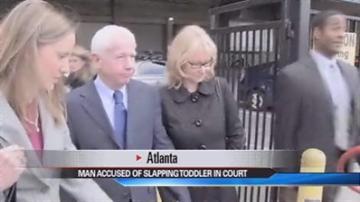 ATLANTA -- He is accused of slapping a crying toddler on a plane but now we are hearing an Idaho man's side of the story.

The 60-year-old was in court Wednesday afternoon and pleaded not guilty to charges that he slapped a 2-year-old and called the boy a racial slur.

It is the first time we have heard his side of the story.  His attorney says he was having a rough day when the incident happened.

"He was traveling from to Atlanta from Minneapolis to decide to take his only child and son off of life-support. He was under a great deal of stress, grieved, he had been up for 24 hours," said Marcia Shein, attorney.

The man's attorney says the case will now go to trial but says her client hopes the boy's family can forgive him for the altercation.