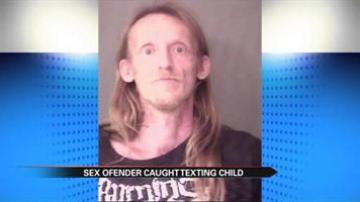 KOSCIUSKO COUNTY, Ind. -- A Michigan man is behind bars after allegedly sending sexually explicit messages to a 10-year-old girl.

44-year-old Robert Northrop was convicted of criminal sexual conduct third degree -person thirteen through fifteen - in 1988. He is a registered sex offender.

He is now charged with child solicitation and is being held on $4,000 bond.

On Tuesday police arrested him for allegedly sending sexually explicit messages and photos to a 10-year-old girl.

The child’s mother found the messages on her daughter’s tablet and immediately called police.

“Just be informed about what’s going on in your child’s life, that’s a key thing. And that’s what the mother did in this situation,” said Sergeant Chad Hill of the Kosciusko County Sheriff's Department.

Parents like Michelle Krick said keeping an eye on kids goes far beyond the playground. And with a 10-year-old daughter of her own she worries about sexual predators online.

“It kind of really does it home. She does have a Facebook account and her own cell phone. But I just it every week, pretty much almost every day,” said Krick.

It is exactly what Hill recommends for all parents.

He also said a simple conversation about the dangers of meeting people online is also important.

“Warn them about the different kinds of sexual predators that are out there. That’s probably the key thing right now,” Hill said.

And while he is not seeing an increase in arrests of sexual offenders, Hill said it is becoming easier for them.

“I would have to say in the electronic world that we live in, there’s more access for predators to entertain these type of situations and get involved with children if it’s not prevented,” Hill said.

Krick said she will continue to be a tough parent if it means keeping her children safe.