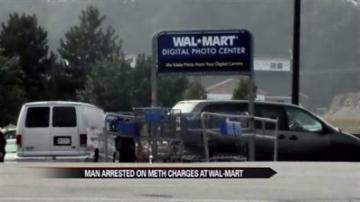 KOSCIOUSKO COUNTY, Ind.-- Walmart shoppers got a dangerous surprise when they went to buy their groceries Tuesday. A man was found sleeping on a park bench outside the store. When police approached him, they discovered he had a mobile meth lab on him, police said.

“Stuff can happen you know with meth labs from what I hear about them. They can explode,” said Gary Sparkman.

“The explosions that have happened, people got burned,” said John Doyle.

Walmart customers agree it was a dangerous situation at the supercenter earlier Tuesday.

A man was found sleeping on a bench outside of the store for six hours.

When he was approached, police say they found a mobile meth lab on him.

The Warsaw Police narcotics and the Indiana State Police were brought in to dispose of the lab.

Gary Kirkwood, who was also wanted on a parole warrant, was arrested.

Customers say as weird as it is to be found at Walmart, with how bad the meth problem is in Kosciusko County, they are not surprised.

“You hear it constantly in hotels and people driving with it in their vehicles,” said Sparkman.

Gary Doyle says police are doing their part to combat this issue.

“I think police are doing about as well as they can with it,” said Doyle.

He blames the economy for meth popping up everywhere and says Kosciusko County will not be clean until the financial state improves.

“Bottom line with the tough economic times out here, I think people are doing anything they can for money,” said Doyle.

Kirkwood was booked into the Kosciusko County Jail on possession and manufacturing methamphetamine.