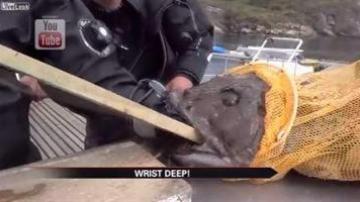 One man found out what it is like on the other side of the hook when he became a fish's catch.

The fisherman's hand was wrist-deep inside what appears to be a monk fish. The man was forced to pry the fish's massive mouth open to free his hand.

The fish latched on to the man's arm while he was fishing with his bare hands.

It is a practice called noodling and it is often used to catch catfish.

In the end the man managed to escape its toothy grip.