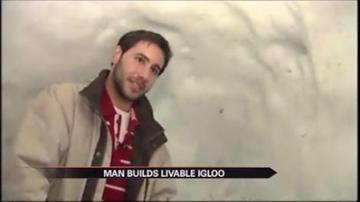 WORCESTER, Mass. -- It has been said "when life gives you lemons, make lemonade" but what about when life dumps heaps of snow on you?

One Massachusetts man answered that by building a place to live.

The man built a giant igloo using only shovels and what had fallen from the sky.

"People may think it's crazy but it's a good workout, you're doing something creative and when you're older it's something you'll remember. Something cool you did while you're young," said Michael Kozlowski.

He says as long as the snow keeps coming his igloos will hold up.