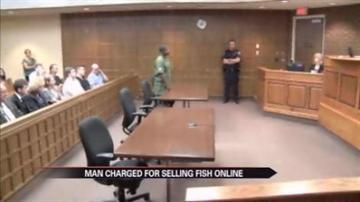 Wednesday the 40-year-old entered a guilty plea for trying to sell catfish he caught in the Kalamazoo River without a commercial license.

The Michigan DNR says sport fishing is not regulated and the fish could be contaminated.

The guy says he did it, because he did not have enough room in his fridge and that he did not think twice about it.

"I didn't know it was illegal. If I knew it was illegal I wouldn't have been trying to do it. I was just trying to get a couple of extra dollars for the fish that I had. Cause I had too many," said Leona Smith.

He placed the ad on craigslist and was caught after selling the fish to an undercover wild-life officer.

He has been placed on four-months probation.