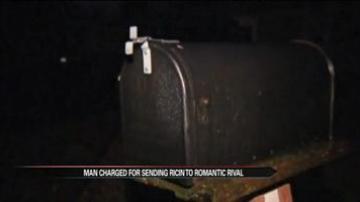 WARMINSTER, PA. -- A 19-year-old Pennsylvania man is charged with attempted murder after he sent a scratch-and-sniff card with traces of the deadly poison ricin.

The man sent ricin to his ex-girlfriend's current boyfriend.

Investigators say he told a co-worker he rubbed ground castor beans inside the card, claiming that it would kill anyone who came in contact with it.

The co-worker later informed police who caught the letter before it reached the man's mailbox.