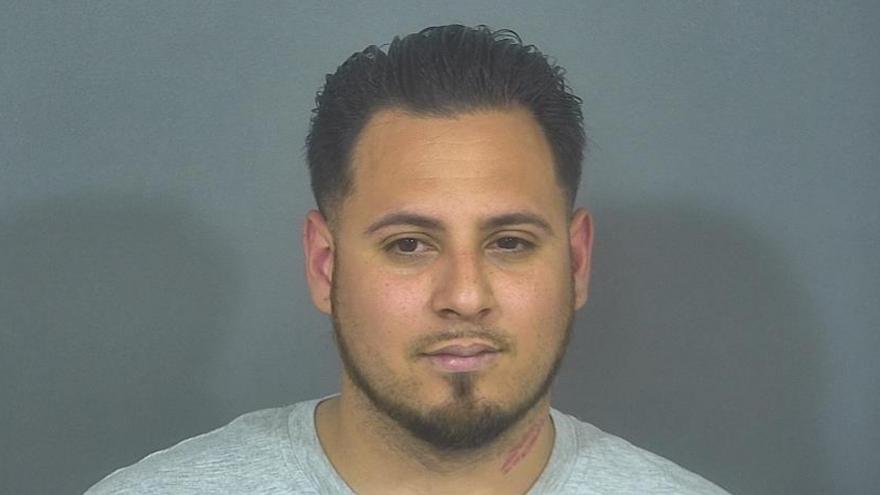 ST. JOSEPH COUNTY, Ind. – A man was charged in connection with a shooting that took place in the 2600 block of South Michigan Street on Sunday, the South Bend Police Department announced.

Hector Estrada, Jr., 31, was arrested and charged with battery by means of a deadly weapon and criminal recklessness.

At 2:15 a.m. on Sunday morning, the shooting victim was leaving a bar in the 1100 block of South Main Street when he got into his dark-colored truck and drove towards a parking lot exit to turn south onto Michigan Street.

Near the exit of the lot, the victim and a gray car, driven by Estrada, nearly collided.

Estrada got out of his vehicle and banged on the hood of the victim’s truck before the victim drove away, according to reports.

Estrada drove quickly to catch up with the victim, allegedly driving in and out of traffic and swerving at the victim.

At the stoplight at Calvert and Michigan Streets, Estrada pulled his vehicle in front of the victim.

The victim got out of his truck with a small pistol drawn and yelled at Estrada, asking what his problem was.

Estrada then drove off.

Moments later, further south on Michigan, Estrada again drove up on the victim and as he drove past the victim, Estrada allegedly fired several rounds at the victim.

One round went through the victim’s truck door and through his left thigh, reports said.

A passenger in the victim’s truck was not hit by the gunfire.

Estrada drove off but was stopped by police, reports said.

Without being questioned, Estrada told police about the shooting.

He told officers that, “…they were trying to jack his [expletive deleted],” and that he knew he had a right to defend himself, according to court documents.

Estrada said people had pulled up beside him in a truck and started beating him up.

He said he thought they were trying to take his car so he defended himself.

At the police station, Estrada said he had gotten beat up in the bathroom at the same bar the victim was at.

Estrada eventually left the bar but in doing so, some of the guys that beat him up were in a truck chasing him, reports said.

He tried to get away but couldn’t, so after they threatened him, he shot a few times at him, according to reports.

Video of the incident supported the victim and his passenger’s version of the events, according to the probable cause affidavit.

Estrada is being held at the St. Joseph County Jail on no bond.

The victim was taken to the hospital and treated for non-life-threatening injuries.