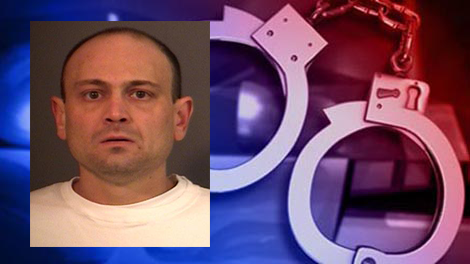 The probable cause affidavit details the events leading up to the SWAT response Friday afternoon.

According to the victim's statements, on April 27 she was staying with Douglas Wood and became concerned about his behavior and fear for her safety.
She texted a friend and wrote "Help me," according to the probable cause affidavit.

Wood saw the text and allegedly stated, "[Expletive deleted] if you're gonna have someone call the cops, I'm gonna make it look like the cops needed to be called."

Wood allegedly grabbed her by the neck and pushed her into the wall causing her to black out. When she awoke, she was on her bed and he was hitting her and strangling her. She then lost consciousness again, according to court documents.

He then raped her in the bedroom, then took her out to the garage, put a dog chain around her neck and raped her again, according to the probable cause affidavit.

After he slept, he told the victim they would "get through this" and asked her to marry him. She said she didn't know and he then put a pillow over her face and attempted to suffocate her, according to the probable cause affidavit.

He also allegedly threatened to put a bullet in her head, kill her child, shoot anyone who came after him and kill himself.

The victim fell asleep out of exhaustion. When she woke up, she discovered Wood was gone and escaped the home. She flagged down a utility worker who called police.

The victim was taken to the hospital and she was preliminarily diagnosed with a brain bleed, along with other bruises and injuries.

Detectives secured a search warrant for Wood's home and requested the SWAT team because of Wood's previous history with SVU cases and his statements to the victim, according to the probable cause affidavit.

The SWAT team made entry to the home at approximately 4:30 p.m. on April 29, but Wood was not there.

Detectives seized several firearms and physical evidence from the home.

The St. Joseph County Prosecutor's Office requested higher than standard bond because he has a history of arrests for violating pre-trial no contact orders, has a previous conviction for strangulation.