Man dies after being pushed in front of train 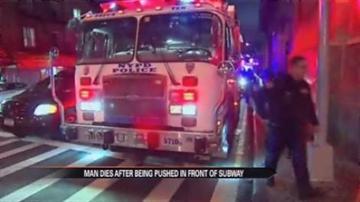 SUNNY SIDE, N.Y. -- A man was pronounced dead at the scene after he was pushed in front of a New York subway train.

There were only five witnesses to the incident but they say a woman fled the scene after the man was struck by the train.

Police are now looking for the suspect but passengers say witnesses were being tight lipped about the incident.

"People were asking them what happened and they weren't giving any info," said James Callanan, subway passenger.

The NYPD is still investigating and haven't yet identified the victim.