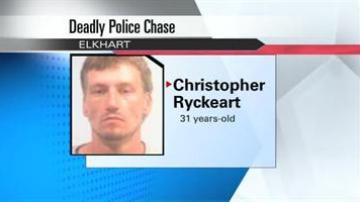 ELKHART COUNTY, Ind. -- The Indiana State Police released the name of the man shot and killed by officers with the Elkhart Police Department.

He has been identified as 31-year-old Christopher James Ryckeart of Elkhart.

Ryckeart led Elkhart Police on a high speed chase. It ended at Marion Street in a back yard.

ABC57 spoke with the residents of the Marion Street home where the chase ended.

The witness was still shaken up and didn't want to be identified.

The high speed chase started in Elkhart and took officers through parts of Michigan.

It ended at Marion Street.

The witness says he watched it all unfold.

"I looked in that boy's eyes before they shot him up," said the witness.

Police and witnesses said after police yelled at Christopher Ryckeart to freeze, he backed the truck into a police car.

"He backed the truck up already, he smacked the officer's car, and when he did that, they bum-rushed the car and just shot him up," said the witness.

The three officers who fired shots are expected to be identified within the next 24 hours.

Ryckeart is no stranger to law enforcement. He has everything from seat belt violations to burglary and theft charges.

Residents are thankful their kids weren't outside playing when the stolen Chevy sped down the alley.