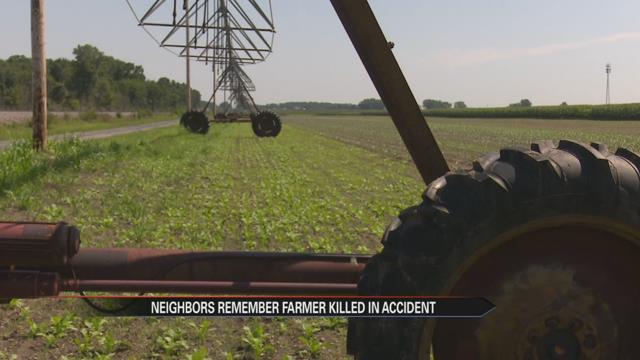 A farmer was killed at 9 o’clock this morning in the 57000 block of Mayflower Road in St. Joseph County.

Richard Snyder was working alone on an irrigation system at his farm, Arthur Snyder Farms, Inc. when a tire blew and killed him.

Now, his close-knit neighborhood is remembering him.

“I normally see him at least once or twice a day either coming up and down the road or out here in the field, and like I say, every time he went by, it was always a big wave, hello,” said his neighbor Brian  Morris.

Brian Morris lives just across the railroad tracks from the Snyders off of Mayflower Road. Sadly, yesterday was the last time he’ll see that wave from his neighbor of five years.

“We have seen rural farming accidents periodically, but it’s pretty rare to have one with this particular kind of mechanism, but sadly it does happen,” said Officer Bill Thompson,  Asst. Chief for St. Joseph County Police.

And it happened to Richard Snyder around 9 o’clock this morning.

Mr. Snyder was working on a 24-inch irrigation tire when the accident happened. He was filling up the tire when it either snapped off the frame or just completely blew, killing him.

“Anytime you deal with truck tires, tractor tires, or all that they have what they call a safety ring that comes around and those get weak, and when you’re airing them up, those get weak and can explode on you,” said his neighbor, Brian.

And his neighbors say rich farmed all his life, so he knew and accepted the dangers.

He was a well-known and well-liked farmer.

“I talked to a couple of his employees, and they said he was a real nice guy to work for. He just wanted you to do a good days work, and he paid you a fair wage,” said Brian.

One of the people who worked with him almost every day was John Matthys, who owns a farm across the street. He was one of the first people to the scene. He said Snyder was one of the kindest, most intelligent people you could ever meet. John didn’t want to appear on camera, because he said Rich was a private person, and he wanted to respect that.

But especially to Snyder’s friends, this serves as a reminder…

“It just goes to show, always treasure what you have at the moment, because tomorrow is not promised,” said Brian.


St. Joseph County Police told me that they will be calling OSHA to let them know what happened, since he was technically killed on the job. However, since the accident happened on his own private property, they don’t foresee the case progressing.