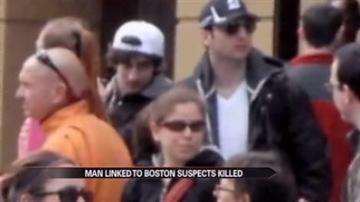 ORLANDO, Fla. — A man who has ties to the Boston Marathon bombing suspects was killed Wednesday morning.

The FBI says one of its agents shot him in Orlando in self-defense.

He was under investigation for his connection to Tamerlan Tsarnaev the bombing suspect killed last month.

The man's friends say the pair only knew each other through MMA fighting and boxing.

They say the FBI's focus on him was intense.

"We had a feeling worst case scenario that something like that is going and it happened eventually - we tried to avoid it you know what I'm saying," said Khusen Taramov.

ABC News learned the man was about to sign a statement admitting to a role in last year’s triple murder Tamerlan was linked to.

An FBI agent was stabbed several times but is expected to be okay.