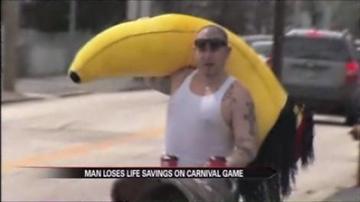 DENRRY, N.H. -- A New Hampshire man is out his life savings thanks to a carnival game.

The man says he lost the $300 he had on him playing "tubs of fun." The game involves tossing balls into a tub.

He says the balls kept popping out but he could not stop playing.

When he was out of cash, he went home and grabbed another $2,300 but lost all of that, all for a shot at an x-box Kinect.

"Because you get caught up in the whole double or nothing. I've got to win my money back," said Henry Gribbohm.

He did end up winning a giant stuffed banana.

The man went back the next day to ask for his money back and got $600.

A police report has been filed and the game has been suspended from being used at other carnivals during the investigation.