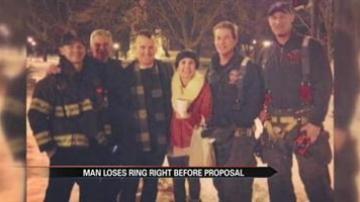 ROCHESTER, N.Y. -- In New York, a perfectly-planned proposal went awry after the would be groom had to call firefighters to save the day.

Chris Hawkins planned on surprising his girlfriend with a romantic proposal on Ontario Beach Park.

He planned to clear a path in the snow before she got there but in the process, the ring fell out of his coat pocket.

He proposed anyway without the ring and then called in firefighters to help look for it.

"I heard a shout that I had been waiting for all night and I just look over and see a guy with a little plastic bag and he was far away and it was just like elation, all the weight of the world off my shoulders," said Hawkins.

The firefighters say that is not the call for help they're used to but they were happy to be a part of the couple's special moment.