Man pretends to shoot in theater 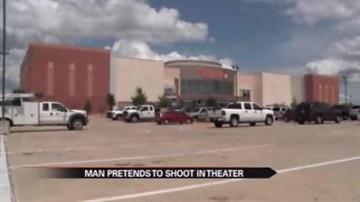 BRYAN, Texas -- Police in Texas arrested a man who they say was pointing his hand like a gun and pretending to shoot into a crowded movie theater.

That action created a scare at a showing of World War Z Tuesday in Bryan, about 100 miles northwest of Houston.

The 54-year-old did not hurt anyone but the way he acted scared those in attendance.