Man reportedly exposes himself to jogger 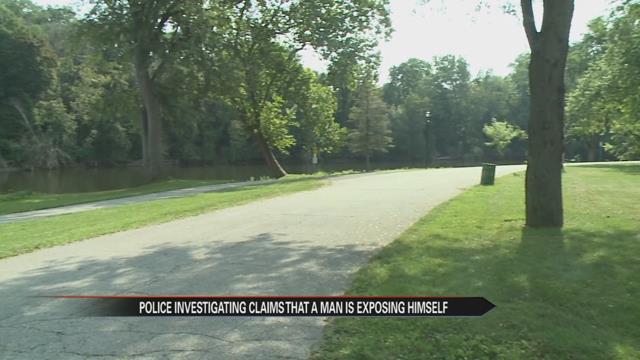 A South Bend woman dialed 911 when a stranger allegedly exposed himself to her on Riverside Drive by the boat launch.

She talked with ABC57's Alexandra Koehn on Facebook about the terrifying situation.

Police said it was reported around 4 p.m. on Thursday afternoon.

The trail by the St. Joseph River is close to the Keller Park neighborhood.

Captain Robert Hammer with the South Bend Police Department said this is the first incident of this nature that's been reported recently.

Captain Hammer said, “She described to us that there was a male party in a pick-up truck, a green pick-up truck, that exposed himself as she was jogging.”

Hammer said it appears to be isolated at this time.

Captain Hammer said, “We looked up that whole area but we didn’t locate that vehicle or that person.”

According to several Facebook posts, more women may have encountered the suspected "flasher" at the boat launch.

Hammer said police want to talk to these women so they can build a case.

Captain Hammer said, “In situations like that, that gives us an opportunity to come out, try to locate that person and hold them accountable.”

Armonii Gladstone lives nearby and he said the whole situation disgusts him.

Gladstone said, “For somebody to do something like that, you gotta be ill or sick in the head.”

Gladstone said he hasn’t seen the flasher, and he hopes he doesn’t.

Gladstone said, “They better hope they find him before he come around trying to do it again, and I see it!”

If you know who may be exposing himself to female joggers, or if you have seen the car before, call the South Bend Police Department.