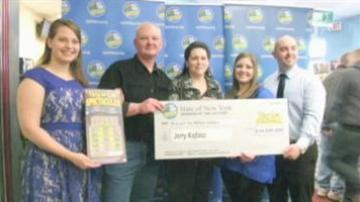 A 53-year-old man in New York was presented a check for $10-million after he won the lottery in a most unusual way.

He bought a bunch of scratch off cards at a gas station when the clerk accidentally gave him one he did not want. So he gave it back.

Then he went out into his car and scratched off seven winning cards in a row.

After realizing it was his lucky day he went back into the store.

"So I just said give me that ticket that he almost gave me by mistake, and another $5 ticket and there it was, it was a winner it was amazing. Ya, that's just how it happened, unbelievable," said Lottery winner Jerry Kajfasz.

The winner said he wants to take his family on a vacation to Poland with all his winnings.