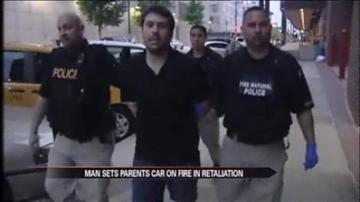 HARRIS COUNTY, Texas -- A man in Texas is in jail for what he allegedly did when his parents refused to buy him a car.

Police say he did it because his parents would not buy him a car of his own.

Now his parents said they are afraid he will come back to do more damage.

"The info we had from the family is that he son was angry at them because they wouldn't purchase a vehicle for him," said Lieutenant Dean Hensley.