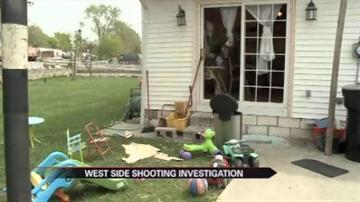 SOUTH BEND, Ind. — A man was taken to the hospital after being shot inside of his home near the intersection of Walnut and Ford Streets in South Bend.

An early morning home invasion drew a bit of attention on South Walnut Street when one of the would-be burglars fired several shots on his way out of the home.

"We was just driving by and we heard it, like we just heard it. Then we saw the police officers and then we stopped and all this is going on,” said Quonate Curry.

"I feel it was probably over some turf war or drug. It's always drugs. It always is,” said Curry.

"Many, many times it comes down to a mistaken identity,” said Phil Trent of the South Bend Police Department.

The family living in The home where the home invasion happened have lived there for 20 years and the residents have no history of illegal activity.

At the time of the home invasion there were ten people inside, according to the victim’s daughter.

Her mother was the first to come across the burglars after they threw a cinderblock through the glass sliding door.

"Sometimes you can't help but confront people. You hear a noise and the next thing you know, you're face to face with a burglar,” said Trent.

When she heard her husband coming downstairs, the burglars ran out the door. As they did, one of them stopped and fired off a few rounds. That’s when her husband was shot.

Police are still looking for the suspects. They say there were around three or four of them.