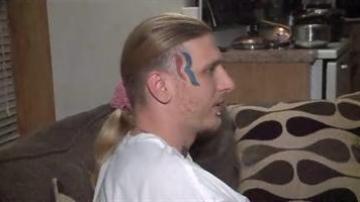 MICHIGAN CITY, Ind. --  President Obama may have won the election, but a Michigan City man will be a Mitt Romney supporter for life.  He has to be, after tattooing Romney's signature on his face.

Eric Hartsburg went above and beyond this year campaigning for Presidential candidate Mitt Romney. He got a Mitt Romney face tattoo.

"I had it tattooed on me because it is something I believe in," said Hartsburg.

He first auctioned his face on eBay, but after that failed, he knocked on a few more doors and someone bought the canvas.

"A Republican candidate stepped up and said, 'I'll give you 15 g's to do the side of the head, something tasteful,'" said Hartsburg.

He said the Romney campaign sign on his face has been getting him a lot of attention, of course positive from the Republican Party.

"There are a lot of people saying, 'Aw, you shed blood for the party. You are a Republican hero,'" said Hartsburg.

There was a lot of negative attention from Democrats.

"A lady at the grocery story said, 'If Romney wins I'll get your face tattooed on my butt,'" said Hartsburg.

When Romney lost the election last Tuesday, Hartsburg said friends and family were worried about how he would deal with his new permanent campaign slogan.

"They were afraid I was going to go on suicide watch or go crazy," said Hartsburg.

But he has no regrets.

"I love it. I would do it all over again in a heartbeat," said Hartsburg.

He knows he supported the Grand Old Party with his mind, body, and soul.

"I know I did all I could for my candidate and my party."