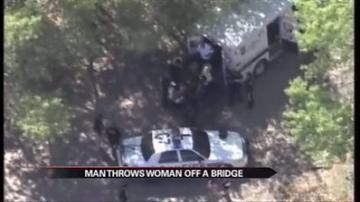 ALBUQUERQUE, N.M. -- Investigators in Albuquerque say a man stuffed two people in his car and then threw one of them off a bridge.

9-1-1 callers said they saw a man shoving people into the trunk of his car but the scene got even more bizarre when police continued to get calls. Calls were saying the man had thrown a woman over the side of a bridge.

Investigators say it was at least a 20 foot drop.

"What they had seen was pretty traumatic and they wanted to make sure police caught up with the individual," said Officer Tasia Martinez, Albuquerque Police Department.

The other victim was found on the bridge and both victims were badly beaten.

The suspect was caught and has been arrested.