Man tries to stop robbery in South Bend with a cane 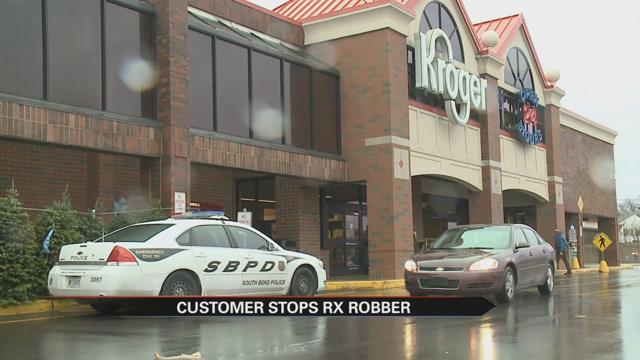 A local man steps in to stop a robbery in progress at a South Bend grocery store. Police say it all happened on Monday around 12:30 p.m. at the Kroger on Ireland road.

A witness was at the pharmacy filling a prescription when he made a split second decision to stop the crook by using a cane.

“I see a guy leap the counter and go towards this one section of pills and just start scoping arm loads of them,” says the witness who did not want to give his name.

While filling a prescription the witness saw the robbery begin. He says he did more than just watch.

“There were some of these aluminum canes there and I picked up a couple of them and when he jumped back over the counter I hit him in the head a couple times. I hit him probably 10 times,” says the witness.

The witness describes a struggle between him and the crook.

On the other side of the store shoppers had no idea what was going on.

“I didn’t know it was being robbed at first until the lady in front of me dashed out and then everyone was like why is this guy running out of the store so quickly,” says Regina Morrell of South Bend.

South Bend Police say the suspect ran out the store and shortly after was found hiding behind a dumpster at a nearby business.

And the man who intervened says he’d do it again.

“It’s kind of like a military guy that’s trained to do something in a certain situation that’s kind of the way I felt. I didn’t want to let him get away with it,” says the witness.

Police say the suspect did not have a weapon. He was arrested after being identified by several witnesses at the Kroger Pharmacy and is now in St. Joseph County Jail.

UPDATE: (12/22/2015) Deon Murphy has officially been charged with the robbery of the Kroger Pharmacy.

According to court documents, Murphy left behind an entire hand print on the pharmacy counter when he jumped over it in his attempt to flee the store.

The court documents also say Murphy left a sweatshirt in the bushes along his escape route which matched the description the witnesses had given. Police say the sweatshirt will be submitted to the laboratory for testing.

The pharmacist was so frightened during the robbery she locked herself in a closet to protect herself from Murphy, according to court documents.