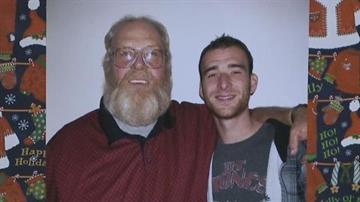 UNION, Mich. -- We all know Mr. Wilson never really hated Dennis, the same is true for these two neighbors.

Jim LeVan, also known as 'Mr. Wilson', and Eric Moore, known as 'Dennis the Menace' have spent a lot of time together. The two lived next door to each other for 20 years and even from the time Eric was a small boy, he stirred up mischief.

"He started pulling a few little pranks like Dennis would do," says Jim LeVan.

It was not long before Eric claimed the title of 'Dennis the Menace' for all his pranks and in return he, affectionately, called Jim 'Mr. Wilson'. Now the two men who were once neighbors are now close friends and have even developed a close bond.

"He is more of a mentor because he was a very good friend and I was always trying to learn everything I could off of him," says Eric Moore.

After being diagnosed with Renal Disease five years ago, things took a turn for the worst. Eight months ago Jim was told by his doctors that his kidneys were failing and would need a kidney transplant to live. He was then put on a donor list.

"I have been doing in the home dialysis since June".

Jim has been doing dialysis since June but his time was limited. Eric decided to take action and get tested. He was a match, and now he is giving Eric a second chance at life.

"He [Eric] goes the good news is your getting my kidney. I say, 'That's great, what's the bad news?' He said, 'You are going to have to wait until after deer hunting season'.

Both men have a long road ahead. Aside from the complications each of them faces, Eric also is has his first baby on the way.

Jim says he could not be more thankful to have more time to spend with Eric and the rest of his friends and family.

"There is no price on it, it's the price of life," says LeVan.

To donate, visit www.ntafund.org and enter “Jim LeVan” in the “Find a Patient” box on the homepage. There is also a link under our "What's Hot" tab on our ABC 57 homepage.