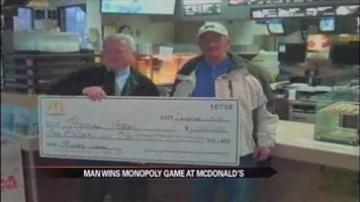 HARRISON, Mich. -- One Michigan man is cashing in on those elusive Monopoly winnings at McDonald's.

For years, one man stopped into his neighborhood McDonald's for coffee but one day he decided to buy oatmeal and it really paid off.

The oatmeal bowl contained the winning game piece from a McDonald's Monopoly game and now he is $1 million richer.

"When I got oatmeal for the first time there, I thought well I'm gonna try that. And so I got the oatmeal and that had the winning piece on it," said Thomas Vozar, Monopoly Winner.

He said he doesn't have any plans for the money but wants to make some repairs on his home.

The McDonald's said this is the first time anyone has won in their area.