Man wrongfully sent to prison forgives cop who sent him there 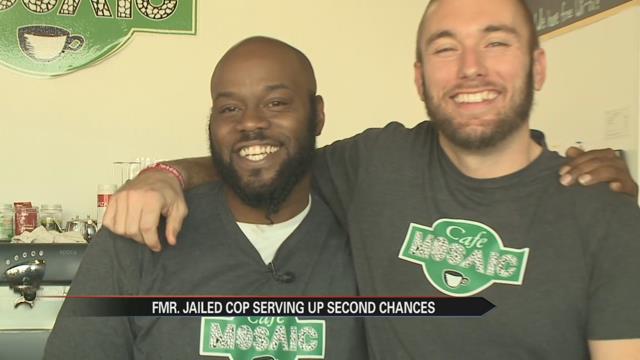 A coffee shop that’s been serving up second chances had a unique turn of events in Benton Harbor. The manager of the store reunited with a man he put behind bars for a crime he didn’t commit.

A local church opened a cafe and resale store in Benton Harbor where they host classes for people getting back on their feet.

Andrew Collins, the cafe manager, went through the program and now manages the cafe.

Collins said he used to be a crooked cop, taking crack cocaine to crime scenes to make the innocent look guilty.

Collins said, “I’d been dabbling with corruption actions and I ended wrongfully convicting or being a part of his wrongful conviction and he ended up getting a ten year prison sentence for possession of crack with intent to deliver.”

Collins said it’s behind bars that he found faith in God. He later confessed to falsifying reports as a Benton Harbor cop, pleaded guilty, and went back to prison.

Collins said, “There’s this part in scripture that says he who is in Christ is a new creation. The old is gone and the new has come and that’s what I tell them. This isn’t the same person who I was.”

But recently Collins came face to face with his past.

Jameel McGee said, “As soon as he realized who I was he was apologizing again and I was that’s forgave. It’s over and done with.”

McGee said he sat in a prison cell for 4 years for a crime that Collins made up.

He got out early because Collins confessed.

McGee said, “I feel like the world opened up.”

He said his new faith taught him about forgiving the undeserving.

McGee said, “For all you guys out there that’s battling with any type of forgiveness any type of hurt, any type of wrong doing just let go and let God.”

Now they work at the cafe together. An unlikely bond and story that they are now telling in hopes that more people will come to this cafe and continue supporting them.

Collins said, “There’s a lot of people out there who probably haven’t had the opportunity for me to say this to them yet. And for them I invited them down to the Café and lets have this talk.”

Collins and McGee are hoping that after this story people will go to their cafe and talk to them if they're having a hard time forgiving someone.