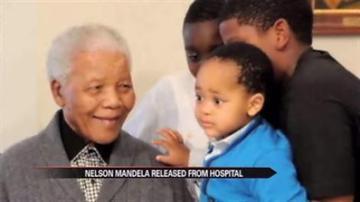 Nelson Mandela was released from the hospital Saturday night. He is now recovering at home.

This was the third hospitalization for the former South African president since December. He continues to fight a serious lung ailment.

A fellow activist who was imprisoned with Mandela says even in decline, Mandela remains tough.

"I've known him throughout his life to be a fighter and I don't think he is ready to give up," said Mac Maharaj, chief government spokesman.

Mandela will turn 95 this summer.