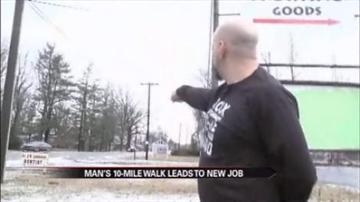 One Indianapolis man was willing to walk in the ice and snow for 10 miles for a job interview. He ended up getting a job he wasn't expecting.

Jhaqueil Reagan was headed to a job interview Friday morning and stopped to ask for directions.

A restaurant owner pointed him in the right direction but when the owner spotted Reagan walking in the ice storm 15 minutes later, he stopped and offered him a job.

"I really don't know what to say about it. It's exciting," said Reagan.

"Anybody that's going to walk 10 miles to an interview in the snow and ice will definitely get here for work for the hope of a job at minimum wage," said Art Bouvier, restaurant owner.

The owner posted the young man's story on line and now it has gone viral.

Since it hit Facebook on Friday, the story has already gotten more than 14,000 likes.