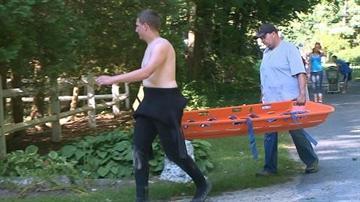 A family’s perfect day at the beach was turned into their worst nightmare in mere seconds, as a member of their family disappeared beneath the waves of Lake Michigan, not to return.

It happened Sunday afternoon just off the beach at Hagar Park in Hagar Township, north of Benton Harbor, Michigan. The family was visiting from Illinois.

Just before 3:00 p.m. 44-year-old Robert Klepacki went for a swim alone in Lake Michigan. His wife, whom witnesses believe was Polish, watched him from shore. When she could not find him, she started calling for help.

North Berrien Fire Rescue team members had just returned from a surf safety class in New Buffalo. Still geared up, they raced to the beach, arriving within minutes of the call.

It was too late though, the man could not be found. “We just saw all the boats and all the helicopters, and it was crazy,” said Taylor Rhode, a young woman who sat near to the family at the beach.

Nearly an hour later, a woman sitting on the beach a mile south of where the man was last seen, saw him floating in the water. She went in after him.

Rescue crews were surprised by where the body had been found. Normally, victims carried away by the currents of Lake Michigan end up north of where they disappeared from. They say weather makes the currents unpredictable.

The man was covered and taken by an all terrain vehicle down the beach to a southern access point where it would be easier to remove him from the beach. The woman who found him was checked out by paramedics, and thanked by first responders.

Meanwhile, the beach at Hagar Park was bustling with activity again. With first responders no longer on scene swimmers were back in the water, playing in the waves. Children using foam boards, men diving into the surf, women walking waist deep among the crashing waves.

No red flags flew on this small beach. No system was in place to warn them. No lifeguard was on duty. “You cannot respect Lake Michigan enough. When there’s riptide warnings, it’s best to stay out of the water,” said Lt. Martin Kurtz with the Berrien County Sheriff’s Marine Division.

On days like Sunday, people swim at their own risk, some not knowing what a riptide was, or how dangerous it could be.

Even the news that a man had drowned just hours before hand, did not deter some of them. But there were a few that today’s tragedy did touch deeply enough to make a difference.

Sunday’s drowning marks the 57 drowning on Michigan's Great Lakes this year. Last year, 66 people drowned on the lake. While many local residents and perennial summer visitors know and understand the risks of riptides, many out-of-town visitors don’t. The unanswered question is how to protect them?