Many Goshen students forced to walk to school this year 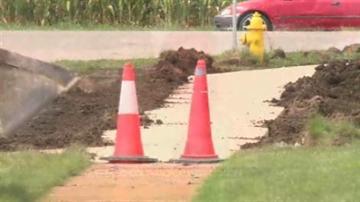 GOSHEN, Ind. -- Students in Goshen Community Schools head back to class Friday, but several hundred students will be walking to class because the district cut 7 school bus routes. Many parents are not happy with the change.

Most parents we spoke with said they didn't have enough time to come up with an alternate plan to get their child to school.

For some, busing is what brought them to Goshen to begin with. Now they'll be forced to either walk their child, hire a babysitter, or let them walk alone.
The sidewalks along County Road 27 are still wet.

The new sidewalk is a compromise from the school district because it cut the bus route to Broadview subdivision.

Now the kids will have to walk to school.

"The only reason I enrolled her in Goshen was because she had bus pickup. And with my young children it was a lot easier to just put her on the bus rather than have to load everybody up in the car and take her to school," said parent Rachel Fletcher.

She tried to move her daughter elsewhere, but she missed the deadline. Now she's stuck.

"My biggest concern right now especially is her having to cross Dierdorff, which is a busy road and there's a lot of kids in this neighborhood that have to cross that road," said Fletcher.

The district's transportation department lost a half a million dollars this year so it cut the 7 bus routes.

That means a handful of neighborhoods are walk zones.

Walk zones were first put in place in 2005. Any child who lived within one mile of a school had to walk.

But it wasn't always enforced

Many parents say a mile is too far for a five year old.

"Okay I don't like it because you know it's far from here. He's almost five years," said Eufemia Diaz.

He won't go to school until next year, but Diaz is already worrying.

"I'm not sure because I work, so maybe I have to look for somebody to take him," said Diaz.

Some neighbors say they walked the route and it took them more than 30 minutes.

The district said it had no choice and expects to lose even more money next year-$1.2 million.

Crews were out Thursday adding sidewalks to some key locations-where those bus routes got cut.

When the district asked the city to pay for the sidewalks, the city voted it down.

So the sidewalks are being installed thanks to the 50/50 sidewalk program. Neighbors pay half/the city pays half.