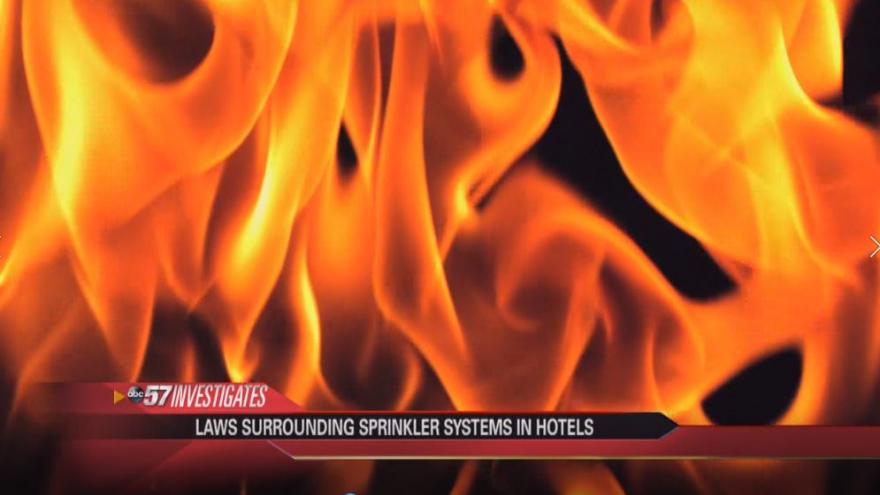 Since the deadly fire at the Cosmo Extended Stay Motel in Sodus Township we decided to look into the laws surrounding sprinkler systems in hotels. The National Fire Protection Association says they can dramatically increase your chances of making it out of a fire safely, but still many hotels across the country aren’t required to have them.

This massive fire at the MGM Hotel in Las Vegas in November of 1980 killed 87 people and sparked a nationwide movement to get sprinklers inside hotels. A 2016 report by the U.S. Fire Administration says an estimated 3,900 hotel and motel fires happen each year causing an estimated 15 deaths, 100 injuries and $100 million in property damage. In 45 percent of those fires sprinklers were not present.

"Since 1991 after those fires in Las Vegas where a number of fires were lost we have required that all hotels have sprinklers," said Tracy Vecchiarilli, Senior Fire Protection Engineer with the NFPA.

According to the NFPA, that code only goes for new construction. Many existing hotels and motels like the Cosmo Extended Stay are exempt. Often the codes vary depending on location.

"It's really up to the jurisdiction which can be down to the county or town level to adopt specific codes and standards and then those are what the fire marshall or the authority having jurisdiction that’s what they are going to use to enforce the safety requirements," said Vecchiarilli.

Federal government employees on official travel are only allowed to stay in hotels and motels with sprinkler systems. FEMA has setup an online search engine that will tell you if a hotel is approved for official travel. If it is, it means the each guest room is equipped with a sprinkler systems and has a hard wired smoke alarm.

"As a fire protection engineer something I do instinctively is to enter into my hotel and look for the sprinklers," said Vecchiarilli. "I would prefer if people would choose hotels that have sprinklers."