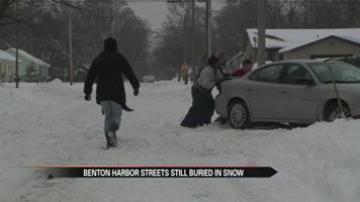 BENTON HARBOR, Mich. -- Most cities have managed to clear away the snow and ice from the roads, but that's not true for Benton Harbor. Residents are upset the roads are still snow covered and slick.

Benton Harbor residents are furious about the condition of their streets. It has been five days since the storm hit and there are roads that are still snow covered

Many people have gotten stuck.

"The level of the snow is so high; you can't see what's coming," said Dennis Hardnitt.

Hardnitt wants to know why residential streets haven't been cleared yet.

Some roads are so bad that if you stop - you're stuck.

ABC57's Darrel Bjoraas found that out the hard way. He spent more than 20 minutes trying to dig his car out before an officer and a Good Samaritan helped him out.

Natasha Taylor says she was on the bus and it got stuck twice.

"You can't get through. Your car gets stuck everywhere. The city isn't coming out to help, they just leaving everybody stranded," said David Johnson.

We wanted to know why the roads are still so bad so we went to city hall to find out how many plows are out and if there was any relief in sight. But no one was available to talk to us.

So drivers in Benton Harbor will have to rely on each other to get through this.

Hardnitt has been helping people who get stuck.

"Because I would want to be helped if it was me," said Hardnitt.

There were several plows out on Friday, but none were hitting any side streets.

We reached out to the city to find out if the recent budget issues were to blame but we're waiting on a call back.