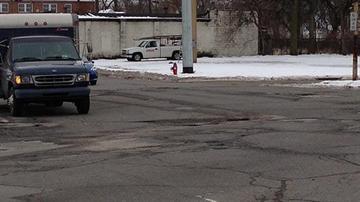 Have you nearly wrecked avoiding a huge pothole? Have you nearly blown a tire because of an especially deep pothole? If you know the location of a dangerous pothole, help us out and map it.

Click here to add your observations and pictures to our map.

ABC57 asked INDOT why some areas are so much worse than others.

Officials at INDOT say heavily traveled areas tend to have more movement in the asphalt, which creates the holes.

The bumpy ride is too much for some drivers and their vehicles.

“Today, actually a customer came in and said they had a really bad vibration after hitting this huge pothole and they bent their wheel almost flat straight across so they had to get a new wheel,” said Kyle Williams of Discount Tires.

Williams has been working at discount tire for three years. He says they get about 3 to 4 customers a day coming in with damage from potholes.

INDOT says the roller coaster temperatures have made the roads brittle and the holes bigger.

With few breaks between snow storms, patching has been difficult.

"What we've seen over the last week is that we've been working so hard on that, that we'll basically have a 5 hour window where the roads are safe again, we're back cleaning pot holes. So these guys are back and forth back and forth as quickly as they can to fill those pot holes and clear ice and snow and back and forth,” said Matt Deitchley of INDOT.

With no snow on Friday, crews were working quickly.

“It's a mobile operation. These guys go in, fill those potholes up quickly and move on to the next one. So we're going to the worst areas first and we have a procedure for determining that,” said Deitchley.