March 2015 could be one of the driest on record 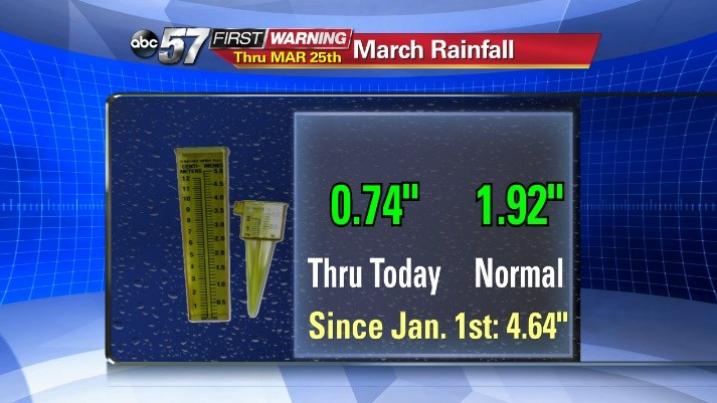 UPDATE: Since March 20th, rain finally found it's way back to Michiana.  A much needed 0.31" of rain fell in the early morning hours of March 25th, alone.  This brought up the total monthly rainfall for South Bend up to 0.74", bumping up March 2015 to 4th driest March's on record.  We still have six more days left of the month and we are tracking more rain to move in in the early morning hours of March 27th so stick with ABC57's First Warning Neighborhood Weather team for the latest forecast.

SOUTH BEND, IN -  If you recall, it was a cold and snowy start to March.  After one of the snowiest February's on record, many were hoping that the first day of March was not what the rest of the month had in store for the area.  Thankfully, Mother Nature did pump the brakes on the snow, however much of March has been dry, making it one of the driest March's on record.

Through March 20th, South Bend has only seen 0.13" of rain.  If we do not see more rain through the end of the month, we could very well take the top spot for driest March's on record since the driest March was 1915 with 0.41".  Normally, we should have seen 1.52" of rain by now.  However, you may be wondering why Michiana is still not in danger of drought?  Well, we can thank the snow pack for that.  The snow pack that stuck around for much of March was holding at least 2.00" of liquid.  When you factor in this number to the rainfall that we've seen this month so far, that brings the total precipitation up to 2.13", which is much closer to the monthly normal rainfall of 2.42".

Be sure to stay up to date daily with the ABC 57 First Warning Neighborhood weather team here and we'll keep you updated through the end of the month to see if this becomes the driest March on record.