March 2016 outlook after a snowy February 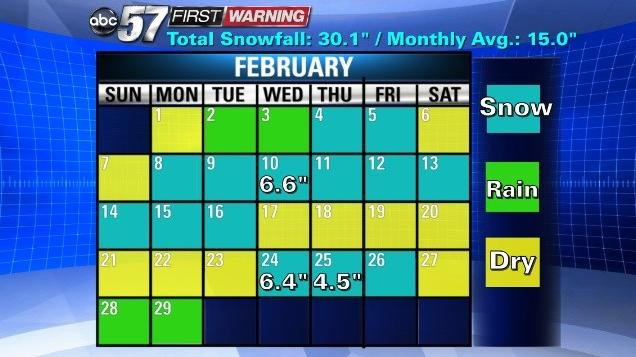 Following the ninth warmest winter season on record and a roller coaster of a month for February 2016, March 2016 started off with a resounding roar with winter’s grasp still holding on as much as possible.  As we look ahead towards the start of spring including the kick off of Daylight Savings Time on March 13th, we need to recap the 29 days of February that saw some of the largest temperature swings in one month.

From the highest maximum temperature reached on February 19th of 62° to the lowest high temperature on the 13th of just 13°, the average monthly temperature ended up at 29.0°, just 1.2° above normal. As for precipitation, snowfall dominated the month, earning its title of the 6th snowiest February on record after two separate snowfall events dumped at least six inches of snow in a 24-hour period.  According to the National Weather Service of Northern Indiana, more snow fell in the 29 days of February 2016 than the combination of snow that fell from November, December, and January.  The total monthly snowfall for February 2016 ended up at 30.1” of snow, nearly doubling the monthly normal. Now as we look ahead towards the rest of the month of March 2016, according to the Climate Prediction Center, temperatures will likely be above normal.  For March, normal highs span from 40° to 53° by March 31st and normal lows span from the low 20s to the low 30s.  As for precipitation, we’ll likely be close to normal, which is nearly 2.5". As for the outlook over the next week, temperatures will finally feel more like spring, with an upswing back into the 60s by Tuesday, March 8th and Wednesday, March 9th. As always, you can stay up to date with the latest forecast updates on the air and online here.  Plus, don’t forget, you can check out the ABC57 First Warning Neighborhood Weather App for alerts and to check out the hour by hour forecast and radar right on your smart phone.