March: Transitioning from Winter To Spring 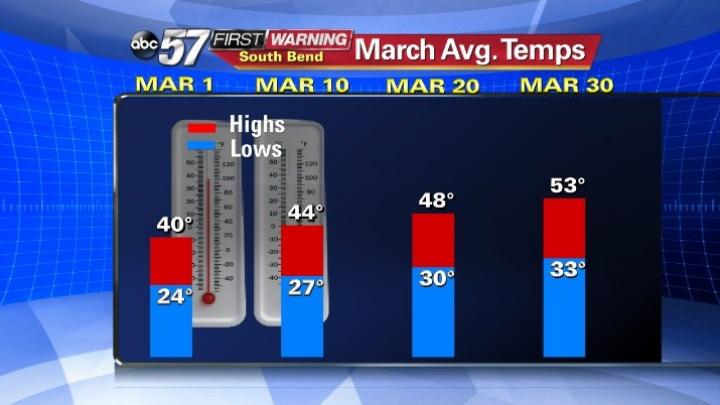 SOUTH BEND, IN - February 2015 was the snowiest February on record.  Even though we did start March 2015 with a snow storm, this month is considered the transition period from winter to spring, and the statistics prove it.  It is the month of Daylight Saving Time and the Spring Equinox, after all.

For March 1st, the normal high temperature is 40°, however by the end of March, the normal high bumps up to 53°, a remarkable 13° difference in 30 days as shown in Fig. 1.  We've also seen our share of extreme temperatures for the month of March.  The warmest day and night was set back just a few years ago in 2012.  March 21st, 2012 reached the record 85°, while the night before only dropped to 65°.

Past March's have also seen it's share of extreme precipitation.  March 1998 was the snowiest March on record with 20.8".  Here's to hoping we stay closer to normal temperature and precipitation for March 2015.  As always, you can look ahead to see if we will remain near normal in your ABC-57 First Warning Neighborhood 10-day forecast here.