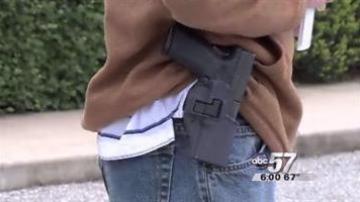 ST. JOSEPH COUNTY, Ind. – All he wanted to do was vote, according to Clay Edinger; but not as much as he wanted to carry his gun into the voting booth with him.

When Edinger walked into the Warren Township Fire Department voting precinct he was wearing his pistol on his hip.

Edinger is a Marine veteran who resigned his commission in order to be commissioned in the Navy Chaplain Corps. He said he carries his weapon with him everywhere he can.

Toting a copy of Indiana Code 35-47-11.1, a state statute that deals with weapons and the restrictions upon them, Edinger insisted he should be allowed to wear his gun while voting.

When election workers questioned him when he walked in the door, another went and informed the assistant Fire Chief, Tony Vanoverberghe, of the situation.

Concerned that Edinger was armed Vanoverberghe, who also works as a police officer and fireman at the South Bend Regional Airport, asked him to step outside.

Edinger asked Vanoverberghe to clarify why he was not being allowed into the polling location.

Vanoverberghe told him he was not allowed to have the gun inside, and offered to have uniformed officers come talk to him if he preferred.

Edinger said that would be fine, and he waited outside the building until officers with the St. Joseph County Sheriff’s Department arrived.

The officers then began searching through the Indiana Code looking for a statute that would prohibit Edinger from bringing the gun into the building.

If they had been on school grounds, or at a courthouse, the issue would be cut and dry.

State statutes clearly indicate that such locations are off-limits to guns.

But the officers could not find a statute that clearly outlined the situation they found themselves in.

After about an hour and a half; the officers, who had asked for assistance from the Election Board, were provided a state statute (35-47-2-1) and relayed it to Edinger, telling him that it kept him from being able to bring the gun inside.

Edinger was skeptical, however, and opted to return home to look the statute up, instead of the solution of locking his gun in his car and voting first as Vanoverberghe offered.

After Edinger left, we began to do some research of our own. We quickly found that IC 35-47-2-1 dealt with the regulation of handguns; specifically, the carrying of handguns without a license or by a person convicted of domestic battery, and the exceptions there in.

There was no indication, nor intimation, that Edinger has ever been convicted of domestic battery; and Edinger is licensed to carry the gun.

It was clear this statute did not apply in this situation.

We contacted the County Clerk’s office, elections department and were connected with the Clerk herself.

Terri Rethlake admitted they had passed on an incorrect statute, seemingly by mistake. She said they had been provided the information by one of the general consul for the Election Board, Leslie Barnes.

We contacted Barnes, who told us she had been given information by the Indiana State Police, and provided us a number to reach them at.

We contacted the State Police at the number provided, but the individual was unable to help us as his equipment was not allowing him to access the state statutes electronically.

He transferred us to the Indianapolis Division of the State Police, where two officers spent the better part of an hour looking for a statute that would prohibit Edinger from bringing the gun inside.

They even enlisted the help of an attorney, who also could not locate such a statute in the same time frame and given the resources they had at the time.

About 30 minutes before the polls closed, Edinger returned to the fire department and waited for a St. Joseph County officer to arrive.

The officer spoke to Edinger and told him that even he, the officer, could not wear his gun into the building to vote.

The officer said he had been told this while working for the South Bend Police Department four years prior.

He could not remember the State Statute that he had been shown.

Edinger calmly requested to record the verbal exchange and then left quietly, without ever voting.

Wearing the gun openly in public allows him to show society that not all bad people carry guns, according to Edinger.

He hopes that when people see him in public with his wife and kids, they view him as a normal person that just wants to keep his family safe.

But there are some who think Edinger is just asking for trouble.

Vanoverberghe, who admits to understanding Edinger’s legal right to bear arms and even carry it openly, cannot come to grips for Clay’s reason for refusing to simply take it off and go vote.

It is his principles that kept him from giving up his gun, said Edinger.