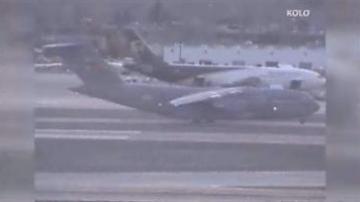 RENO, Nev. — The flag-draped caskets of the seven marines killed during a training exercise in Nevada were loaded onto a plane Wednesday night.

It took off from the airport in Reno and took the bodies to their homes in seven different states.

They died in explosion at Hawthorne Army Depot.

The military said it is still investigating what caused the 60-mm mortar to malfunction.