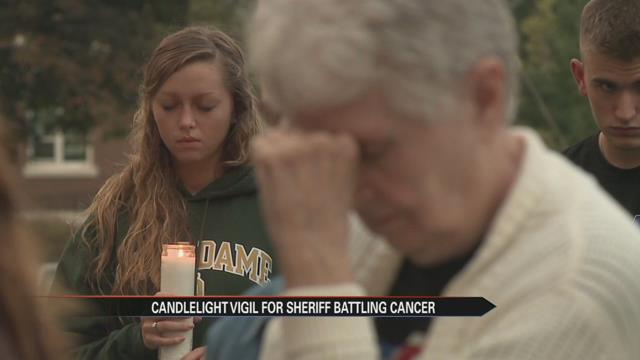 Hundreds gathered at the Marshall County Courthouse to show support for a public figure going through hard times.

Former Marshall County Sheriff Tom Chamberlin was diagnosed with cancer back in 2014 and Thursday, the community he served held a candlelight vigil just to express their love for him.

The city of Plymouth was the venue for a tribute to a man who represents the motto, “501 Strong.”

Residents say that slogan, attached to many signs and bumper stickers, meant everyone in Marshall County is family.

“You know it’s a family and you take care of your own," said former police officer Ted Brown. "And this whole community is a family. We’ve brought so many people together just to support somebody”

As he continues to fight his battle with that disease, his supporters made sure he didn’t have to fight it alone.

"I don’t know if I can say enough good things about tom and what he means to a lot of people,” said resident Josie Puglisi.

Although some tears were shed, everyone wished him well.