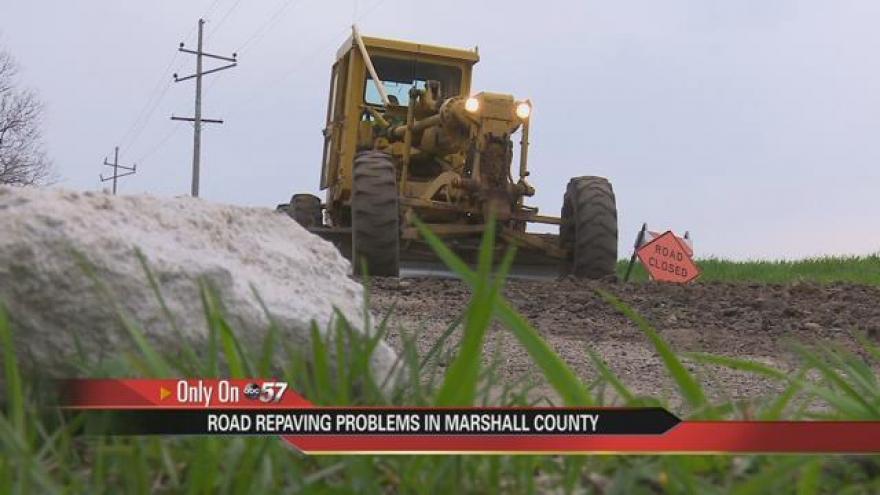 Neighbors in Marshall County were surprised to discover their roads being repaved this week. Some frustrated homeowners voiced their concerns exclusively to ABC 57’s Jess Arnold.

“When we came home Monday and we had those big chunks of limestone all over our road, first we knew about it,” said John Thomas, who lives on seventh road in Plymouth.

It is Marshall County’s plan to start repaving certain roads.

Thomas was none too happy that large rocks and a sign saying ‘loose gravel’ were his first warning.

“I can’t disagree with that. If I lived on a road like this, I think that that’s the right thing to do is to let somebody know,” said Marshall County Commissioner Mike Delp.

One neighbor who says his vehicle was damaged because of the roads says he certainly wishes he had known construction was coming.

“[I was] going to the hospital on the way to a doctor check-up, I hit a big hunk of that stuff and ruined a tire,” said Chester Klingerman, Jr., who also lives on Seventh Road.

“The concept behind it, I think is good, to put it out ahead of the reclaiming machine, that’s grinding up the road, but the screening process has to be much better the next time,” said Commissioner Delp.

Boulders behind him, Thomas is concerned construction will grind to a halt after this week.

“If they had a schedule where they could tell me, that would be fine, because I realize you got to do this to get to the paving stage, but they don’t have a plan. They’re just willy nilly tearing up roads around here with no intention of putting it back, because it’s already happened…over here on Ironwood,” said Thomas.

ABC 57 checked out Ironwood, and he’s correct. The dirt road is still covered in gravel.

“It did have potholes, but I could ride my motorcycle, I could drive my motor home and cars and avoid the potholes. You can’t avoid a whole dirt road,” he said.

“When it gets to a certain point, we’re throwing good tax dollars away that could be used for something else by continuing to fill potholes,” said Delp.

“In a day or two, we’re going to have rollers on it, rolling it…so when it’s all done…It will be a dirt road…Let it sit for a year, keep it leveled up, and then put material on it next year to put it back to an asphalt or double chip and seal road,” he said.

“I think by the time it’s done, I’ll probably be gone,” said Klingerman with a laugh.

Commissioner Delp insists, however that “it will be done next year.”

Until then, Thomas said he’ll have to learn to live with the gravel.

“I’m gonna have to drive through this stuff all summer and all winter,” he said.

The commissioner says the county started the process this week, because they could only reserve the reclaiming machine this week or sometime in July, and they wanted to get the ball rolling.