Marshall County running out of salt 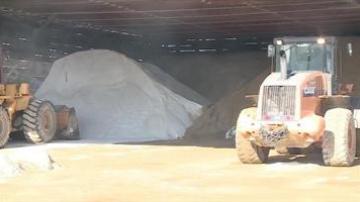 MARSHALL COUNTY, Ind. -- According to Marshall County officials, they don't have enough salt to get through another snow storm.

The Marshall County Highway Department says the salt shortage goes beyond the county and state levels. The salt suppliers are running low as well.

"I've called Cargill, I've called North American Salt, I've called Morton's Salt and Detroit Salt and all of them just put you on a list and say see if you can find some more," said Neal Haeck, Superintendent of the Marshall County Highway Department.

Haeck says he has 50 tons of salt on reserve but it's not enough.

The county has been mixing sand with its salt to help stretch the supply. But now, the sand outweighs the salt.

Sand without salt is a recipe for disaster.

"It freezes and it clumps and it doesn't have any melting capabilities because it's so cold out, so bitterly cold out, especially right now," said Haeck.

Heack says it's time to get creative.

"We've got to have something with our sand to make it have melting qualities because we've got to protect the public. That's what it's all about," said Haeck.

He's looking into calcium chloride and beet heat, a combo the county used in 2008, the last time it ran out of salt.

"It's a little more expensive but it's an option," said Haeck. "Winter is far from being over and we've got to do something."

He says putting his name on a list and hoping for a shipment of salt isn't going to cut it.