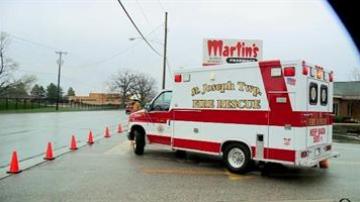 ST. JOSEPH, Mich. -- Police responded to a bomb threat at a Martin's Supermarket on Cleveland Avenue in St. Joseph, Michigan Wednesday. It was the second bomb scare at the Martin's since January.

According to Berrien County dispatch, they received a call regarding the bomb threat at 3:30 in the afternoon.

Fire crews blocked off the area, evacuated the store, and brought in bomb-sniffing K-9 units.

The store was closed for over four hours.

Police did not find anything suspicious.