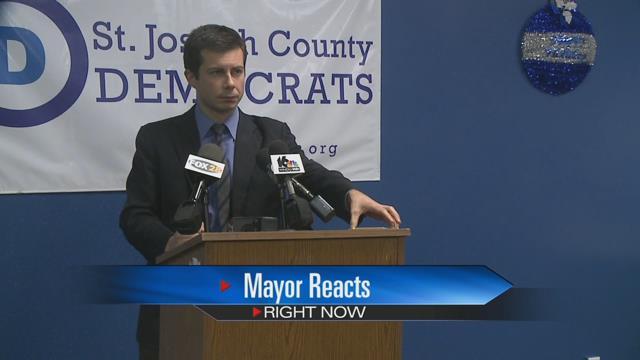 He spoke about his sentiments after attending the event in Indianapolis Tuesday.

Wednesday, the mayor called for a bipartisan effort to reverse what he calls an embarrassment of some of the governor’s polices like the Religious Freedom Restoration Law.

“I believe that no one should be mistreated for who they are, what they love or what they believe,” said Governor Mike Pence during his State of the State Address.

Reflecting back on an eventful year for the state, those words from Governor Pence addressed the biggest criticism of his administration in 2015.

“For a moment I actually thought he stake out a position or show a way that was actually going to balance religious liberty which we all believe in and making sure that people aren’t discriminated against state,” said Mayor Buttigieg. “Instead he punted.”

It’s a criticism about the governor Mayor Buttigieg still carries to this day.

“That’s exactly why I was hoping to see a little more leadership out of Indianapolis yesterday,” he said.

Buttigieg was disappointed the governor refused to back pedal some of the rhetoric in the RFRA law during his speech yesterday.

It’s a law, Buttigieg believes, is not reflective of most Hoosier ideals.

“What’s unfortunate here is that most of Indiana is in one place, including the business community that’s traditionally Republican and the governor and a handful of legislators are in a totally different place.” Said Mayor Buttigieg.

So now in spite of what he’s calling a missed opportunity by the governor, he’s calling for a bipartisan effort to show other states Indiana is inclusive.

“Indiana is not the state that people think we are, we’re not backwards, and our laws need to reflect that we got a chance to do that lets make the most of that chance,” he said.