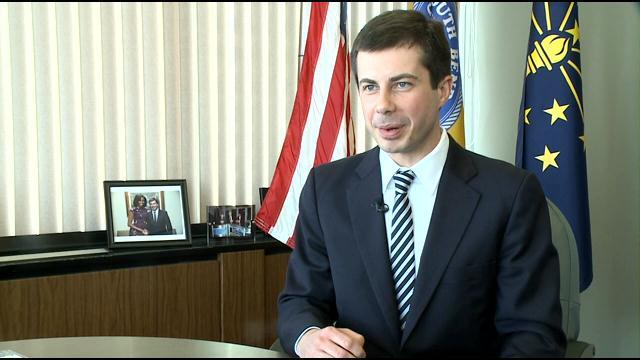 South Bend Mayor Pete Buttigieg will be one of this year's recipients of the John F. Kennedy New Frontier Awards, which honors people under the age of 40 who are changing communities through their commitment to public service.

Congressman Joe Kennedy III will present the award to Mayor Buttigieg and co-recipient Kirsten Lodal, at a private ceremony at Harvard University’s John F. Kennedy School of Government on November 12.

According to a press release, the awards are given to "two exceptional individuals whose contributions in elective office, community service, or advocacy demonstrate the impact and the value of public service in the spirit of John F. Kennedy."

Mayor Buttigieg will receive the Fenn Award, which is given to an elected official whose work shows the importance of public service as a way to address public challenges, according to the press release.

The award is named after Dan Fenn, the first director of the Kennedy Library and former member of the president's staff.

Congressman Kennedy will give each recipient a ship's navigational compass in a wooden box. It is inscribed with the following quote from John F. Kennedy.

We stand today on the edge of a New Frontier….I believe the times demand new invention, innovation, imagination, decision. I am asking each of you to be pioneers on that New Frontier.”

In January 2012, at age 29, Pete Buttigieg became the youngest mayor to serve a U.S. city of more than 100,000 people, and he quickly established South Bend as a model for municipal innovation and smart government.

Buttigieg led the implementation of a landmark open data policy in South Bend, including a website that provides freely accessible, user-friendly and transparent data about the city. He also launched the “311” system, which allows residents to identify issues or concerns via smartphone and then track the city’s follow-up. The city, in turn, collects data from the system to analyze its own performance.

In 2013, Buttigieg proposed an ambitious project to address a surge in abandoned homes in the city: the Vacant and Abandoned Property Initiative called for the demolition or refurbishment of 1,000 homes in 1,000 days. Buttigieg launched a partnership with Code for America, a nonprofit that offers technological support to communities seeking to solve core public problems. Under the partnership, South Bend developed an innovative approach to data collection and property assessment, and met its goal of addressing 1,000 vacant homes before 1,000 days had passed.

Pete Buttigieg serves as a lieutenant in the U.S. Navy Reserve; in 2014, he was deployed to Afghanistan for a seven-month tour of duty. A graduate of Harvard University, he was born and raised in South Bend.

Kirsten Lodal co-founded LIFT, an innovative anti-poverty nonprofit, during her sophomore year at Yale University. While volunteering in mentoring programs focused on at-risk children, Lodal was struck by the lack of comprehensive support services available to the parents of the children she served. She and co-founder Brian Kreiter established LIFT, then called National Student Partnerships, as a one-stop resource center for low-income adults who were struggling to support themselves and their families. Lodal has served as CEO since its founding.

LIFT strives to address the complicated, often disparate causes of poverty by pairing highly trained volunteers with low-income individuals and families. LIFT volunteers, many of whom are college students, provide ongoing one-on-one support to help those in need gain access to crucial resources such as food and housing assistance, job training, educational opportunities, health care, and more. Equally, volunteers serve as mentors and advisors in helping those they serve to develop life skills and professional networks to break the cycle of poverty. Lodal is now focusing on incorporating the latest science related to brain development into LIFT’s work, to interrupt the inter-generational transmission of poverty by helping low-income and poor parents mitigate toxic stress and early adversity for their children.