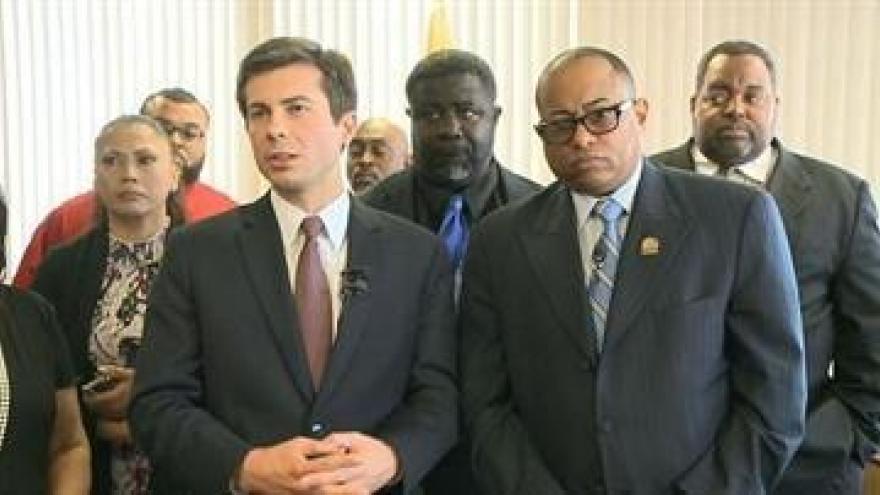 SOUTH BEND, Ind. – Two days after community activists announced plans to begin seeking Mayor Buttigieg’s removal from office, the plans have been put on the shelf and; the mayor has agreed to join them in pressing for a federal investigation into the contents of recorded telephone conversations found at the police department.

Mayor Buttigieg spent the better part of an hour and a half in a closed door meeting with Bishop Tavis Grant and members of the Rainbow PUSH Coalition.

The President and Vice President of the South Bend Common Council, and two other community leaders also attended the meeting.

After the meeting, Buttigieg held a press conference where he and Grant stood side by side denouncing racism and any discrimination that may have taken place in the city.

They both agreed, all parties needed to come together to heal divisions that have developed between citizens, the local government, and local law enforcement.

It was announced that Reverend Jesse Jackson would be urging the Department of Justice to investigate the contents of the recordings found by then Director of Communications for the Police Department Karen DePaepe, for violations of the law.

The mayor has agreed to participate in this endeavor.

When asked why he has so suddenly changed his stance on conducting an investigation, Buttigieg said that he has always maintained that he himself could not investigate the alleged offense, but that the federal authorities could.

When asked what he had done prior to today’s meeting to solicit such an investigation from the Department of Justice, the mayor didn’t answer the question directly but did say that Friday’s meeting went a long way toward moving that option forward.

Meanwhile, Grant praised the mayor for his courageousness in choosing to stand with the community activists.

When pressed about the activists calls for his impeachment and Grants praise of the mayor being somewhat contradictory, Grant explained that the people voted Buttigieg in, and as far as he could tell the mayor had not obstructed justice.

Sure enough, it turns out that the plans for the seeking Buttigieg’s impeachment have been put on hold.

According to Mario Sims, the spokesman who first announced the impeachment plans, the activist group is pleased to have the mayor on board.

But that doesn’t mean they are tossing the plans out completely. Sims says they will be watching the mayor to make sure he sticks to what he has agreed to.

After meeting Grant swung by the community briefing being held at a nearby church, to speak with concerned residents; Buttigieg chose not join him.

In a much more animated fashion, Grant explained the situation to those in attendance, and made prophetic remarks about what could come about in the future.

Many of those in attendance were energized by the speech.

Grant also announced the Rainbow PUSH Coalition is planning to open an office in downtown South Bend, in order to be a voice for community members from here on out.

In Buttigieg’s office, Grant said “We do know that there’s a problem, and we’re not going away until the problem is fixed.”

Finally, Grant announced that Reverend Jesse Jackson will be coming to South Bend, sometime before the end of the month.

Jackson is expected to speak to community members and go before the Common Council to official ask for their support in this effort to secure a federal investigation.

And so as this chapter of the scandal over recorded telephone conversations comes to a close; the next is about to begin.

“We are going to fight to get a special investigation in South Bend; to get to these tapes,” said Grant.

But they won’t be the only one’s fighting.

There are two issues tied to this scandal; what is on the tapes is only one of them. The other is the way Buttigieg handled the firing of DePeape and the demotion of former Chief of Police Darryl Boykins.

Those legal battles are beginning to take shape as well.

When asked how demoting Boykins and terminating DePaepe protected them from facing indictments for suspected felony violations of federal law and helped the community; Buttigieg said, “Federal authorities did not come here to tell us everything was just going along fine. They came here to tell us there was a problem. But what I think the community needs to understand is federal authorities, to the best of my knowledge, seized all tapes; and they won’t let me or anybody else hear them. So for those who care about what is allegedly said on those tapes, there really is nowhere to go but to the Department of Justice.”

When it was pointed out that his response did not answer the question, Buttigieg was asked the same question a second time. He responded with, “I felt that there was a choice between quickly addressing the concerns of federal authorities, or seeing them come in and handle it their way; which may have involved criminal indictments. I thought that if that would have happened, it would have torn the community apart.”

Ironically, the community has been somewhat torn apart anyway as a result of Buttigieg’s decisions; and the question remains, would it have been worse if Boykins and DePaepe had been indicted?

Surely, the contents of the tapes would have become part of public record in the course of their trials, which is the same result that is being sought now.

And, given the reaction people have had to their demotion and termination respectively, how much worse could it have affected the community if Boykins and DePaepe were indicted and allowed to clear their name in a court of law, as opposed to having a specter of doubt hanging over them because they have been disciplined but not charged with a crime?