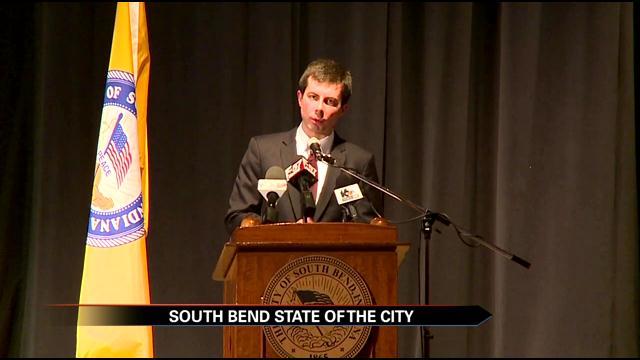 South Bend Mayor Pete Buttigieg took to the podium at Washington High School for his annual State of the City address. In just two hours, he covered a lot of ground and gave folks a look into the future of Michiana.

He took the time to thank the community and his staff for supporting him while he was in Afghanistan.

He said he's proud of how much the city grew in those 7 months.

But Mayor Pete also spoke about some controversial issues such as crime in South Bend and diversity within the police department.

First, he touted the success of the “1,000 houses in 1,000 days” initiative, his answer to the public's concerns over the number of vacant and abandoned homes in the city.

“We are 742 days into that initiative and I am pleased to report that 790 homes have been addressed,” says Mayor Buttigieg.

Addressed means the homes were either demolished, repaired or put under contract. [Click here to view an interactive map of the abandoned homes and their disposition]

“Many were repaired without the use of taxpayer funds,” says Mayor Buttigieg.

Then, he dove into the issue of crime. An issue the city has struggled with in the last year after a wave of gun violence.

“Both violent crimes and property crimes are at their lowest rate in over 20 years in our city,” reports Mayor Buttigieg.

He thanked the Group Violence Intervention Program for having something to do with that.

“Since that group kicked off the strategy last May, compared to comparable periods in the previous year, the number of persons shot in crimes in our city is down by 39-percent," says Mayor Buttigieg.

The last issue Mayor Pete addressed was a sensitive one.

He noted the police-involved shootings that happened around the country and even the racial tensions in South Bend.

He mentioned the “Breathe Easy” t-shirts made by a Mishawaka Police officer and the wire-tapping investigation.

He says race relations between police and people are something he is trying to improve, moving forward.

“We cannot reach our full potential for community-oriented policing until we have made it the norm that all residents feel and know that we have every reason to be both pro-minority and pro-police at the same time,” says Mayor Buttigieg. “We may have a long way to go but we are headed in the right direction and we are moving.”

Click here to see "South Bend by the numbers"